Lei Cidade Limpa is the Portugese word for the Clean City Law that was put into operation in Sao Paulo, Brazil by mayor Gilberto Kassab in 2006. The law states that all outdoor advertising on billboards, posters, busses, taxis and shopfronts is prohibited. Fed up with the 'visual pollution' of over 8,000 billboards and ads the whole city of Sao Paulo was stripped clean. What Gilberto Kassab had not anticipated though, was that the taken down ads and large billboard structures uncovered many slums and sweatshops. In fact, 1.9 million people in Sao Paulo / that's 19.8% of the population / live in these slums or 'favelas'. In my research I came accross the Paraisopolis Favela near Morumbi, where the contrast between rich and poor is enormous. The Condomínio Edíficio Penthouse as seen on the bottom left side of the satellite picture, was for me the ultimate building to focus my concept on, with its swimming pools overlooking the Paraisopolis Favela. My type is visible from this penthouse and the city's helicopters. The text 'time to tackle poverty' is also a reference to the great football players that emerge from these favelas. The visual typeface that I designed is in accordance with the Clean City Law and is painted on the rooftops of the Paraisopolis favela, at the same time providing a colorful sight from the ground up in the colors of Brazil. 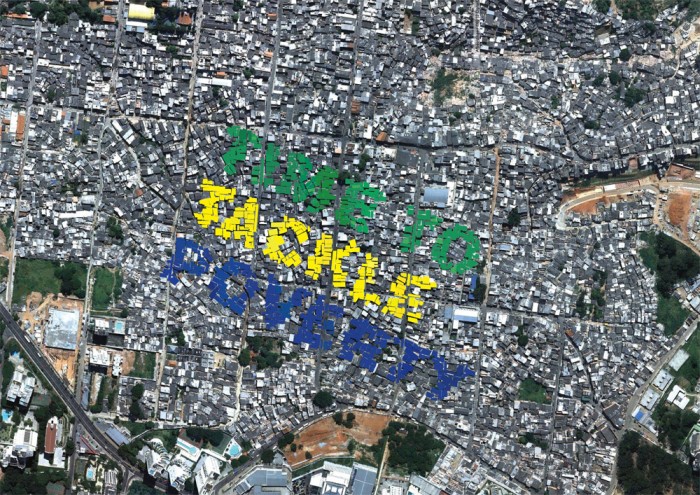