In Oil & Conflict / Air & Ground / I aim to show how oil and war are always intertwined. I chose 3 wars in the Middle East to illustrate this: Gulf War I (1980-1988) in Iran, Gulf War II (1990-1991) in Kuwait, and the Iraq War (2003-2011) in Iraq. For each war I wrote a short introduction explaining the parties and interests involved, the justification that was told to the public, and graphs in which I show the military combat zones and the location of the oil fields. Each war is represented by a differently sized section and printed on slightly transparent paper, to really show the connection in my diagrams between where the war was being fought and in which areas the oil fields lie. The small booklet Air & Ground is an image supplement where I combined images I found on Google Earth (in the present) from oil fields with smoke emmissions in Iraq / Kuwait / Iran with imagery from past wars fought in the same location. Only by looking at the shape of the smoke emitted by combat zones and oil fields I tried to combine them in such a way that the connection between oil and conflict becomes abundantly clear. 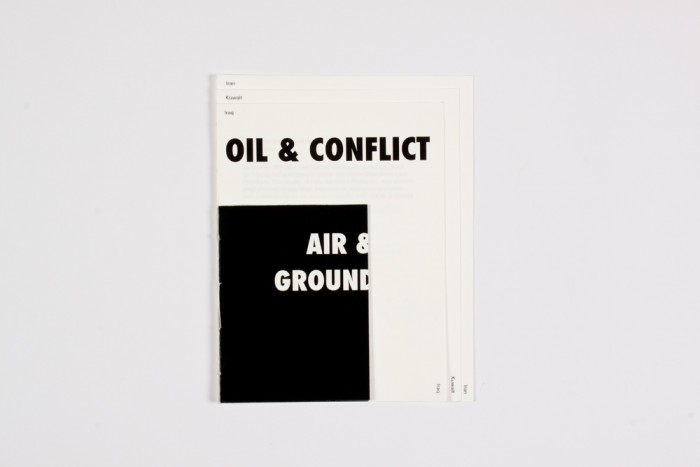